Asre Khodro: The Industrial Development & Renovation Organization of Iran (IDRO) and Renault have signed a strategic agreement on Fri. in Paris to create a new joint venture. 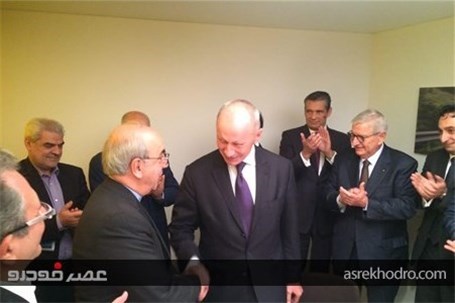 Reporting "Asre Khodro", The agreement, which will allow Renault to strengthen its presence and accelerate its growth in Iran, was signed Friday on the sidelines of the Paris Motor Show between Mohammad Reza Nematzadeh, Iranian Minister of Industry, Mine and Trade, and Carlos Ghosn, Chairman and CEO of Renault.

The first vehicles to be produced in the plant will be the Symbol and the Duster, beginning in 2018.

"With 2 million vehicles planned for 2020, the potential of the Iranian car market is undeniable. This agreement confirms our strategic choices made in Iran and opens a new era allowing Renault to hold a privileged position in the country,” said the CEO of Renault.

The joint venture will, on the one hand, include an engineering and purchasing center which will support the local suppliers, as well as a plant with an initial production capacity of 150,000 vehicles a year, which will be added to Renault’s current capacity of 200,000 vehicles.

Under the agreement, the group will, for the very first time, develop its own distribution network with sales and after-sales services in line with Renault brand standards.

Renault has been present in Iran since 2003 through a joint venture with Iran Khodro and Saipa.