Italy to broaden cooperation on auto industry with Iran 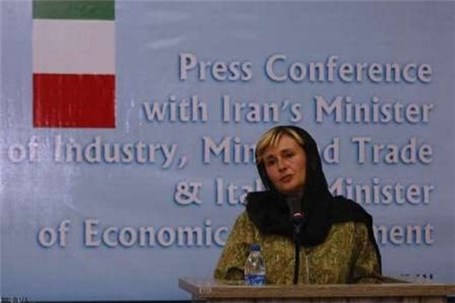 Reporting "Asre Khodro", The Italian Minister for Economic Development Federica Guidi on Tuesday said economic relations with Iran are deep-rooted and Rome is interested in broadening automotive cooperation with Iran.

The Italian minister arrived in Tehran at the head of a delegation on Tuesday and conferred with Iran’s Minister of Industries, Mines and Trade Mohammad Reza Nematzadeh.

On expansion of cooperation between Iran and Italy on automobile production, she said there is no doubt that cooperation with Iran on auto production will be launched with more strength as demands in the Iranian market are very high.

Economic relations and cooperation between Iran and Italy are very deep and the volume of trade exchange between the two sides before sanctions stood at over seven billion euros, Guidi said.

“We are now at a sensitive juncture and believe that the recent accord not only will be to the benefit of Iran but also Europe and the world,” she said.

“In the past, Italy was Iran’s traditional trade partner, but today we seek to play an extensive active role in various fields,” she said.

She called for establishment of win-win and long-term relations between the two sides.

Italy spares no efforts to provide Iran with new finance routes and believes in continued fruitful cooperation between the two sides, she said.