Asre Khodro - Local carmakers are overly dependent on imported parts and in the best ‘localization’ case scenario some essential parts are still imported, though not exceeding 7%. 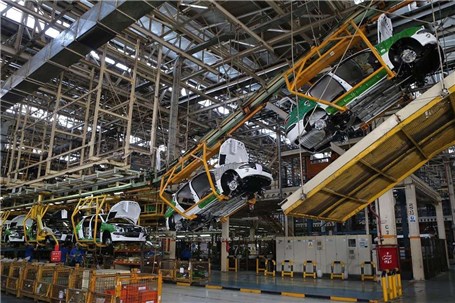 Reporting "Asre Khodro", Localization is one of the oft-mentioned mantras of the government in regulating new automotive contracts with foreign firms. As per a notification issued by the Ministry of Industries in November 2017, at least 40% of the vehicle parts used in joint ventures with foreign carmakers should be manufactured in Iran by March. If the local companies fail to comply, the government will consider their cars completely-built-up imported units and this would translate into much higher tariffs.

However, a recently published report by Iran Vehicle Manufacturers Association has admitted that reaching the 40% threshold is a tall order.

Cars manufactured and assembled in Iran are classified in IVMA report based on maker and model. According to the report, share of locally-made parts in local carmakers’ output vary between 20% to 93%. It merits mention that according to industry insiders the localization share includes car paint and tiers.

For instance, the report says 13% of the parts used in SAIPA’s Pride are imported. Pride is a small city car produced since 1993 by the second largest local carmaker SAIPA. According to the company, it has sold over 7 million units of this car in the past quarter-century. However, SAIPA still relies on foreign (mainly Chinese) suppliers for keeping production lines rolling. The sedan has a 33.7% share in SAIPA’s total output.

It took SAIPA and its affiliated parts makers 25 years to be able to produce 87% of the parts used in the Pride -- a car with absolutely no high tech parts. One can only imagine how many years it would take for the company to produce a Citroen car without reliance on French suppliers. In 2016, SAIPA and Citroen signed a joint venture deal to produce and/or assemble two models, namely the C3 and C4 in Iran.

The Islamic Republic of Iran Customs Administration says that during the nine months to Dec. 21, auto parts had the largest share of the import bill (4.58%) followed by cars and heavy-duty vehicles at 3.11%.

The report states that 93% of the parts used in IKCO’s Peugeot 405 and Samand are made in Iran. Peugeot 405 has been produced by Iran Khodro for almost a quarter century. The vehicle has an outstanding 39% share in IKCO’s total output. Samand is IKCO’s first locally-designed vehicle.

Just like its archrival IKCO, locally manufactured parts have a varying share in cars SAIPA sells in the huge and growing local market.

The reality of the company’s Pride has already been mentioned and discussed in this write-up. SAIPA assembles/produces several Chinese-derived vehicles in collaboration with Brilliance, Changan and Zotye. Hardly 20% of the parts used in the vehicles are made in Iran.

Both IKCO and SAIPA also assemble Renault’s Logan. According to IVMA, 44% of the parts used in this model are imported.

The association reports that privately owned automotive companies like Bahman Group, Kerman Motor and Modiran Vehicle Manufacturing Co are doing as poorly as their semi-state-o