Asre Khodro: Iran's automotive market enjoys one of the best returns on investments globally, according to a new document by Roland Berger Strategy Consultants. 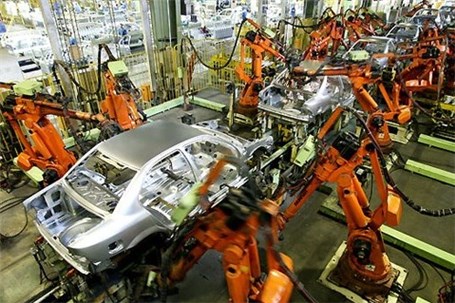 Reporting "Asre Khodro", In a report released by Automotive World, the German-based consultancy group aims to give global automotive companies an insight into the Iranian car market.
Automotive players looking for lucrative opportunities will need a thorough understanding of recent developments and particulars of the Iranian market, including its competitive environment, the regulatory and taxation conditions, and customer preferences.

Rushing Back to Market
After reaching a peak of 1.5 million units produced in 2011, it crashed in 2013 with production numbers reaching 670,000 units. By 2014, production had recovered to 930,000 that year.
After western sanctions against Iran's civilian nuclear programs were lifted, former trading partners are scrambling to get back into Iran. Peugeot is back with a new Iran Khodro joint venture that includes €427 million (US$483 million) in debt waivers and discounts for the Iranian manufacturer.
Peugeot and Iran Khodro plan to produce the Peugeot 2008 SUV and Peugeot 208, with the first vehicles rolling off production lines in 2017.
Daimler, which gave up its 30% stake in Iran Khodro Diesel in 2010, has already announced plans to restart sales and local production.
Intense demand for its commercial vehicles, trucks in particular, is expected in view of the brand's popularity in Iran.
Players such as Audi, Volkswagen, BMW and Hyundai, which have not had a manufacturing presence in the country, started exploring the market and holding discussions with prospective Iranian partners in mid-2015.
There is still a perceptible caution for now: BMW has said it will hold back and see how political and economic developments unfold. Fiat Chrysler has described the Iranian market as very promising, but too early to judge.

Automotive Strengths
The ongoing sensitivity of the political situation notwithstanding, the fundamentals of the Iranian market are highly promising.
Iran has a population of 80 million–roughly the same size as Germany–half of which is under the age of 30 and highly educated, particularly in science, engineering and technology.
The IMF has predicted an economic growth of 4.4% in Iran from 2016 onwards, if sanctions remain lifted.
Although the country continues to be dependent on oil revenues, it has managed to gradually reduce the share of government revenues based on oil exports.
As of December 2015, the share of oil in Iran’s budget was 26.1%–a decrease of 13.8% over same period of last year.
Iran’s car industry is its second largest after its oil industry and prior to the sanctions, Iran was the 20th largest car manufacturer in the world. The automotive industry employs 700,000 people directly and 2.4 million people indirectly in related industries, equivalent to 10% of the country's employable population.
Iran exports vehicles only to some countries in the Middle East, as well as to Belarus, Algeria, Senegal and Venezuela.
Its central geographic location means it has significant growth potential as an export hub. Peugeot has announced plans to export 30% of the vehicles it produces in Iran, taking advantage of a government scheme to give generous tax breaks and other incentives to foreign investors who construct factories in Iran and export more than 30% of their production.

Premium Potentials
Premium car sales are expected to outperform the overall market with an annual growth rate of 66% until 2020, while the rest of the market will grow by 16% within the same period.
Iran’s young population will reach its peak purchasing power by 2040. Currently, there are 147 cars for every 1,000 (the UK, by comparison, has 519 cars per 1,000 people, and the USA 809).
The Iranian government has introduced initiatives to modernize the country’s vehicle fleet, which on average is about 11 years old, such as new emissions standards and a vehicle scrappage scheme, which was introduced in 2005 with the aim of taking old and inefficient cars off the roads.
In 2015, over 320,000 vehicles were scrapped as part of the scheme and the government predicts that 200,000 vehicles will be traded in every year for the next 10 to 15 years.
Foreign brands continue to enjoy a positive reputation among the public, despite attracting the ire of Iranian officials as a result of their retreat during the sanctions period.
According to an August 2015 study, Iranians perceive imported goods as being of superior quality, with 49% of those interviewed saying they would be interested in purchasing an imported car.
But importing complete cars to Iran has never been a big business due to the high import tariffs; completely built-up imports dropped to between 35 and 40,000 units during the sanctions. They recovered rapidly in 2014 to 106,000 units and this upward trend is expected to continue, as historically high tariffs are slowly being reduced.
A 100% import tariff for new cars was reduced to 90% in 2006 and lowered again to 70% in 2010.
Hybrid vehicles, however, are an exception–an import tax of 4% was set to promote their purchase, resulting in a 112% increase in hybrid vehicles sales in 2014.
Although Iran is the world’s seventh-largest oil producer, it has limited refining capacity and is seeking to promote hybrid vehicles that run on natural gas.
The Iranian government disagrees over whether to continue to reduce import tariffs or not. In 2015, a group of Iranian parliamentarians, as well as the head of Iran’s customs administration, called for an increase in car tariffs to boost government revenue and protect local manufacturing.
It is likely, however, that the Iranian government will continue to relax import tariffs, given its long-term goal of joining World Trade Organization, among whose members car import tariffs are 3.5% on average.
Even very high tariffs and a ban on engines with capacities higher than 2.5 liters have not dented wealthy Iranians’ enthusiasm for luxury models in recent years. From March 2011 to 2012, during the height of sanctions, 563 Porsche models were imported into Iran at a total cost of US$50 million.
On top of that, customers had to pay the 90% import tariff.

Business Not as Usual
Iran has traditionally maintained government monopolies in the oil sector and major manufacturing industries. In recent years, the government has gradually reduced its ownership in Iran Khodro and SAIPA, the two largest Iranian carmakers, down from around 50% in 2008 to 20% in 2010. Smaller Iranian players, however, continue to complain of an effective duopoly and preferential treatment for the two carmakers.
The government’s priority is to build up the domestic industry’s expertise while continuing to shield it from largely foreign competition. That’s why CBU strategies will remain efficient only as a mid-term strategy, and only for low volume models.
Iran Khodro announced in 2014 that it can manufacture the TU3 engines for type 2 Peugeot 206 cars “completely on its own” and “without assistance from Peugeot”.
Greenfield approaches in Iran are untested terrain for foreign investors, but given the country’s current policy priorities, joint ventures remain the best entry to the country’s vehicle market.
Foreign investors prepared to navigate Iran’s intersection of regulatory requirements, market conditions and its unique political and cultural landscape will be well-positioned in what is promising to be a highly lucrative market.