Iran will made cars in Oman and Iran:

Friends with many benefits

Asre Khodro: Oman shares the Strait of Hormuz with Iran and maintains cordial relations with Tehran. As Iran gradually reintegrates into the global economy, Oman is becoming a stepping stone for Iranian companies seeking to penetrate new African, Asian and Arab markets. 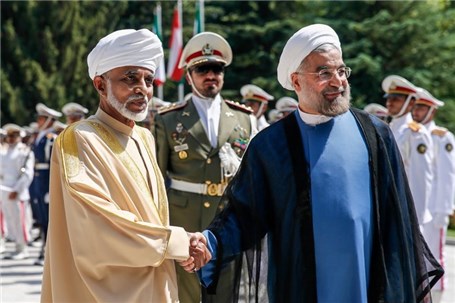 Reporting "Asre Khodro", Oman’s emergence as a critical trade hub linking Iran to several continents is consistent with the sultanate’s independent foreign policy, which often operates outside the regional framework. Oman’s commercial, cultural and geospatial links to non-Arab lands are rooted in its history as ruler of an empire that stretched across portions of modern-day India, Pakistan, Iran, Somalia, Mozambique and Tanzania.  Now that Iran is shedding the sanctions it has borne for years, Oman has new opportunities to position itself as an increasingly important trade corridor.
The Joint Comprehensive Plan of Action (JCPOA) was implemented Jan. 16. Six days later, region media reported that Tehran’s ambassador to Muscat, Ali Akbar Sibaveh, declared that Iran will “repay” Oman’s capital, Muscat, for its influential role in getting the nuclear deal passed and the sanctions lifted. Sibaveh said, “Friends at times of need are few and Oman stood with us through thick and thin, and we do not forget our friends.”
Iran made good on that promise in March when it announced it is establishing a $200 million joint venture with Oman. The venture, Orchid International Auto, will build an automobile plant in Duqm, situated along Oman’s Arabian Sea coast. Oman’s state-owned investment fund will share ownership with Iran Khodro Co. — Iran’s largest car company — and an Omani investor.
The Iranian automotive group intends to begin production next year to produce 20,000 units before mid-2018. Iran Khodro’s chief executive, Hashem Yekke-Zare, announced that only 5,000 units are intended for Oman and that the other 15,000 are destined for Ethiopia, Eritrea, Sudan and Yemen. Iran also plans several other projects in Oman, including a nanotechnology plant, a hospital complex and the inauguration of flights between Oman and Chahbar, Iran. In January, Iran Khodro also signed a $436 million deal under which France’s PSA Peugeot Citroen will produce 200,000 cars annually at the venture’s peak. The companies are to be equal partners, Iran’s Financial Tribune reported. Plummeting oil prices have severely damaged Oman’s state finances, pushing the Persian Gulf Arab nation into a financial squeeze. Like other Persian Gulf states, Oman is determined to diversify its sources of revenue. In fact, 21 years before Saudi Arabia’s Deputy Crown Prince announced the kingdom’s Vision 2030, Oman outlined its Vision 2020, which was also aimed at growing the nation’s private economy, increasing revenues outside of the oil sector and investing in the country’s human capital. Yet as Omani-Iranian trade grows, and ports such as Duqm offer Iran myriad opportunities, Oman’s fellow Persian Gulf states also have much to gain from the sultanate’s enhanced infrastructure. When the Omanis began constructing the Duqm port in 2013, Saudi Arabia and the United Arab Emirates recognized a chance to decrease their dependence on the Strait of Hormuz for transferring their own oil and initiated plans to connect their roads, railways and pipelines to Duqm.