Asre khodro- Iranian Minister of Industry, Mine and Trade Mohammad Shariatmadari and Turkish Economy Minister Nihat Zeybekci agreed to hold a meeting of the two countries’ joint economic commission in Tehran next month. 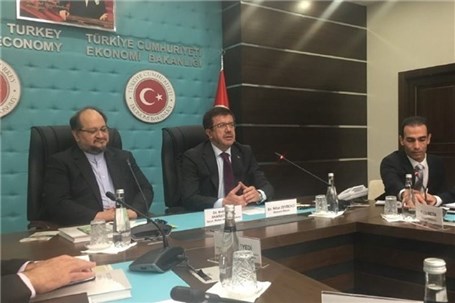 Reportimg "Asre Khodro", meeting in the Turkish capital of Ankara, Shariatmadari and Zeybekci held talks on a range of issues, including ways to boost bilateral relations between Iran and Turkey in economic fields.

The two ministers also agreed to hold a meeting of the two countries’ joint economic commission in Tehran next month and open an exhibition of Iranian products and goods in the Turkish city of Istanbul.

The Iran Solo Exhibition will open on October 25 and last until October 28, according to the commercial attaché of the Iranian Embassy in Turkey, Hamid Zadboum.

The event will be launched after an official ceremony with senior Iranian and Turkish officials in attendance, he said.