Asrekhodro- Mahindra & Mahindra (M&M) is poised to enter Iran with its XUV500, KUV100 and Scorpio pick-up, attempting to break the dominance of French and other European automakers in the market that has turned stricter in automobile safety and emission norms. 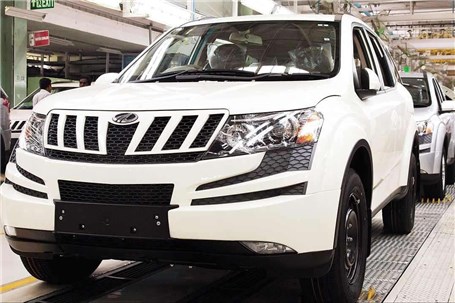 Reporting "Asrekhodro", The company has signed an agreement for collaboration with a local business group, which is expected to be materialised later this year. Mumbai headquartered M&M  already sells farm equipment, tractors and other products in the country.

When contacted, a M&M spokesperson said that the company has got into collaboration with Azim Khodro for imports and distribution of Mahindra vehicles in Iran.

“Iran is a highly competitive market and requires vehicles to conform to latest European vehicle regulations.  Our products XUV500, KUV100 and the Mahindra Scorpio Pick-up were displayed at the Teheran Motor Show last November. These vehicles were well received and will be considered for the Iranian market, subject to further testing and validation, later in 2018,” the spokesperson said.

The recent developments are  not the only strategic step, M&M has taken to enter the highly lucrative Iranian market.

It is reported that in May last year Mahindra Group-owned Pininfarina had signed a £70 million deal with Iran Khodro to produce a new modular  platform which can accommodate at least four vehicles. Pininfarina is an  Italian designing and engineering firm. Pininfarina is reported to be involved in the entire process of getting the car to production, right  from concept design to the final product.

Company sources said that Iran recently upgraded its emission norms for automobiles, which are on par with those in European nations.

Further, the country warrants a high degree of indigenisation of the vehicles or else it attracts high custom import duties.

“It’s a very challenging market, but at the same time offers huge opportunity for growth” said a company executive.

After oil and gas, the Islamic Republic’s biggest sector is automotive industry as it contributes about 10% of GDP and gives employment to over 4% of the country’s population.

According to the industry analysts, there was huge growth in lran’s car manufacturing sector during 2000 to 2013, which fizzled out after imposition of fresh sanctions in 2013. However, the sector has seen some surge in recent years after the country signed a nuclear deal in 2015 with European companies including Renault, Peugeot, Citroen try to reestablish themselves in the market. The Chinese car makers, not to be left behind are pursuing the market aggressively.

The Iranian government reportedly presented certificates to around 40 foreign car manufacturers wanting to start business in the country. The Iranian car market is dominated by Iran Khodro and SAIPA, which are subsidiaries of the state-owned Industrial Development and Renovation Organization.