Asre Khodro: Prior to Iran’s nuclear deal with P5+1 (the United States, Russia, China, France and Britain, plus Germany), many Iranians expected a boom in the domestic auto market during the post-sanctions economic recovery, which has not yet materialized. 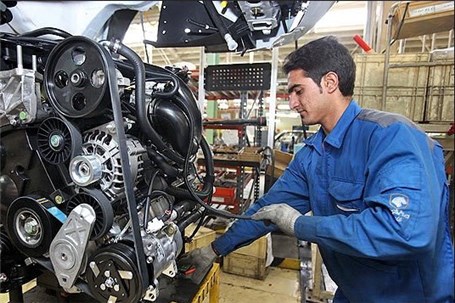 Reporting "Asre Khodro", While many were looking forward to a significant decline in prices and a noticeable growth in automotive industry, almost exactly the opposite has happened. The prices are rising and car dealers are complaining about market recession.

To fully understand the situation, one must go back a little and study the last decade and the elements leading to the dramatic bust in Iran’s auto market.

Until 2011, Iran’s automotive industry was flourishing and production rate was rising. According to a report published by the International Motor Vehicle Manufacturers, Iran produced 1.6 million cars and ranked 13th among international manufacturers in terms of production numbers.

Following the sanctions imposed by the US and the EU and the concurrent rise in production costs, the value of Iran's currency rial declined considerably and several foreign companies, breaching their contracts, declined to fulfill their legal obligations and departed from the country. These led to a huge jump in prices.

In addition, high inflation and a negative growth rate led to a striking decline in national income and purchasing power. Therefore, even though the sanctions were lifted, the auto market did not observe the expected growth.

As a result, people face different narratives from car manufacturers and car dealers.

As Ahmad Nematbakhsh, secretary of Iran’s Vehicle Manufacturing Association, predicted in an interview with ISNA that the deal will ultimately help revive the domestic auto industry.

Nematbakhsh also forecast an unavoidable rise in prices by saying, “Since the new cars are equipped with the latest technologies and are of higher quality compared to those currently available in Iran, the prices are likely to be higher as well.”

Considering the rise in operating expenses, any significant decline in prices will depend on normalization of international banking and trade relations.

One’s gain is another’s loss. While benefiting manufacturers, these measures will have the exact opposite effect on car dealers. A market once dominated by middlemen and dealers does not exist anymore and the rules of the game have changed.

Gholamhossein Qasemian, chairman of Car Dealers’ Association, said “60 car showrooms have been shut down so far this year”.

This was a result of new government regulations that stipulated the sale of cars by official representatives only, which favors the consumer rather than independent dealers.

Iran’s auto market presents a vast variety of opportunities and foreign automakers are eager to gain as big a share as possible from this highly lucrative market. For example, in 2014, cars sold in Iran made up 1.7% of all the cars sold worldwide. The winner of this tight race will be the one who best adapts to Iran’s market conditions and quickly presents new cars at reasonable prices.

Sout Korea’s auto exports down 1.6% in Feb. Renault to Return to Iran: Deputy Minister Renault to stay in Iran despite US sanctions M&M plans SUV foray into Iran Automotive Industry in Iran, a short review Automakers are forced to implement new car standards Removing some price ranges from the car market Renault Lead the Way, Nissan Climb An End to Car Importing Suspension The Renault partnership in Russia changes the investment location in Iran
No Cherry-Picking, All Low-Quality Cars Have to Go Details of new rules for importing car to Iran European carmakers on the road back to Iran after nuclear deal Renault has reached to the top market for imported cars in Iran Iran is the place for peugeot to jump the platform What Future for Iran Car Market? France’s Peugeot, Total Looking for Stronger Presence in Iran French Leverage in Iran Auto Industry Iran Carmakers Obliged to Offer 2-Year Guarantees Over 13 million cars in use in Iran Renault Imports to Iran Increase 110% VW's Seat considers selling cars in Iran - CEO Iran to Finalize Deal with Renault in Weeks: Minister Iran Khodro Group Retains 39% Market Share Iran stars as Renault powers to record 2016 sales Renault Duster May Be Obsolete VW to made CNG cars for Iran Iran has potential to be top-10 auto market by 2020 Renault Sales in Iran Up by 127% in September Volkswagen and Skoda look into Iran market entry Renault Looks to Grow Automotive Presence in Iran Peugeot targets 150,000 vehicle sales in Iran in second half A positive political environment has helped Iran’s car market Peugeot to try for making Iran its manufacturing hub in Middle East, Africa Germany’s Bavaria to dispatch trade delegation to Iran on Sept. 4 No request to raise the automobile's price is sound Record Registrations for Groupe Renault in H1 2016 Automotive Targets Highlighted How to seize Iran’s automotive opportunities Renault’s Iranian market share rises 7-fold in post-sanction era VW In Iran Rouhani vows to privatize Iran’s car industry VW and Skoda reportedly eyeing Iran as sanctions lift Japanese traders seek new opportunities in Iran Peugeot and Renault in pole position to enter Iran’s car market Iran Opening Up, The New Land Of Opportunity Picking winners in the race to Iran Iran important market for European businesses: expert Azerbaijan not impressed by car opportunities of Iran Impact of Iran deal on the automotive market European car makers strives to regain share in Iran's auto market Iran automotive market ‘on edge to take off’
Back to top