Picking winners in the race to Iran

Reporting "Asre Khodro", Ramin Rabii remembers the excitement one night in Tehran about 20 years ago when rumors whipped through the city that a McDonald’s MCD -4.39% franchise would be opening on Valiasr Street. “I showed up there that night, and it was totally packed,” says Rabii, who was 16 at the time. Police arrived at the planned restaurant site to clear crowds from the street, he recalls. But to general disappointment, the new storefront turned out to be a local imitation. The real Big Mac was still banned.

Iranians may not have to wait much longer. The nuclear deal that the U.S. and Europe signed with Iran on July 14 could slowly phase out many economic sanctions, finally allowing Western companies to sell their wares in the country and unleashing one of the world’s largest untapped markets for Western business.

Iran’s $406 billion economy offers immense opportunity. It’s home to 78 million people, many of whom are young, educated, and well traveled, with money to spend—and not just on hamburgers. Already some believe there are 6.5 million iPhones—not ­counterfeit—in circulation, even though Apple AAPL -2.50% is barred from selling products directly in Iran.

In many industries, embargoes have contributed to what amounts to 36 years of pent-up demand. Iran’s national airline has planes that are on average 23 years old, and officials say they plan to spend $20 billion on 400 new aircraft over the next decade—good news for Boeing BA -3.43% , which already provides parts and maintenance under a special permit. There are few major international hotel chains or car dealerships in Iran, which has hospitality executives and automakers salivating. And Iranian officials say they intend to invest billions in upgrading creaky oil and gas facilities, which could mean a windfall for oil-services firms.

“There is not a single week when we don’t host at least one or two foreign delegations,” says Rabii, who hankered for a McDonald’s store as a teenager and is now CEO of Tehran investment firm Turquoise Partners. “They all say they want to be the first in Iran,” he says.

That seems unlikely for most U.S. companies. The new deal still faces a bumpy path to approval in D.C., and even if it is approved, sanctions related to human rights abuses—rather than nuclear weapons—will remain in place. The big change will be Treasury allowances for foreign subsidiaries of U.S.-owned companies, as well as products related to aviation, food, and medicine.

European competitors, by contrast, look set to sign major deals quickly. Mercedes-Benz, Peugeot, and Renault have announced plans this summer to start selling to Iran’s huge auto market, with which they already have deep ties (Iran was Peugeot’s biggest market outside France until 2011). And French hotel chain Accor is set to open a hotel later this year.

Once U.S. businesses arrive they will still face major challenges. Global risk consultant Verisk Maple­croft warned clients of Iran’s “cumbersome and bloated bureaucracy as well as high levels of political interference.” It also cautions that conflict could flare between Iran’s increasingly wired, savvy youth and the powerful clerics who run the country.

Yet for all that, in late July McDonald’s posted a notice seeking franchise partners for Iran, looking for those with “high integrity,” experience, and a record of success. Iranians may soon get their Big Macs—this time for real. 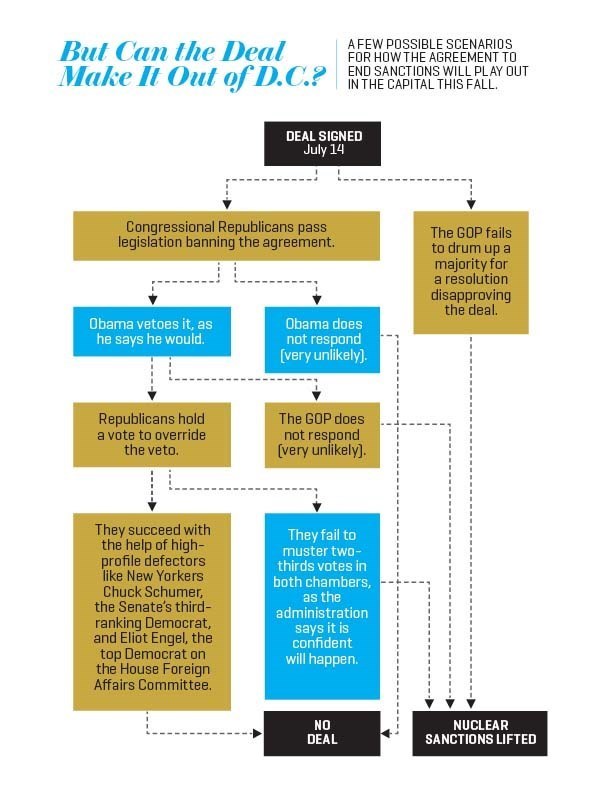 Who comes out ahead in Iran

Oil-services companies: Iran says it needs $230 billion worth of upgrades to its energy facilities, good news for Schlumberger and Halliburton.

Airplane makers: Iran plans to buy 400 planes in the next decade, a boon for Boeing and Airbus.

Russian oil and gas firms: Iran aims to double its oil exports, which could drive down global prices and hit Russia particularly hard in its key markets of Asia and Europe.

Pistachio growers: Nut growers in California have benefited from sanctions, but Iranian farmers are prepping for a big return. — Tory Newmyer

A version of this article appears in the September 1, 2015 issue of Fortune magazine.

Sout Korea’s auto exports down 1.6% in Feb. Renault to Return to Iran: Deputy Minister Renault to stay in Iran despite US sanctions M&M plans SUV foray into Iran Automotive Industry in Iran, a short review Automakers are forced to implement new car standards Removing some price ranges from the car market Renault Lead the Way, Nissan Climb An End to Car Importing Suspension The Renault partnership in Russia changes the investment location in Iran
No Cherry-Picking, All Low-Quality Cars Have to Go Details of new rules for importing car to Iran European carmakers on the road back to Iran after nuclear deal Renault has reached to the top market for imported cars in Iran Iran is the place for peugeot to jump the platform What Future for Iran Car Market? France’s Peugeot, Total Looking for Stronger Presence in Iran French Leverage in Iran Auto Industry Iran Carmakers Obliged to Offer 2-Year Guarantees Over 13 million cars in use in Iran Renault Imports to Iran Increase 110% VW's Seat considers selling cars in Iran - CEO Iran to Finalize Deal with Renault in Weeks: Minister Iran Khodro Group Retains 39% Market Share Iran stars as Renault powers to record 2016 sales Renault Duster May Be Obsolete VW to made CNG cars for Iran Iran has potential to be top-10 auto market by 2020 Renault Sales in Iran Up by 127% in September Volkswagen and Skoda look into Iran market entry Renault Looks to Grow Automotive Presence in Iran Iran’s Car Market: Heading High or Low? Peugeot targets 150,000 vehicle sales in Iran in second half A positive political environment has helped Iran’s car market Peugeot to try for making Iran its manufacturing hub in Middle East, Africa Germany’s Bavaria to dispatch trade delegation to Iran on Sept. 4 No request to raise the automobile's price is sound Record Registrations for Groupe Renault in H1 2016 Automotive Targets Highlighted How to seize Iran’s automotive opportunities Renault’s Iranian market share rises 7-fold in post-sanction era VW In Iran Rouhani vows to privatize Iran’s car industry VW and Skoda reportedly eyeing Iran as sanctions lift Japanese traders seek new opportunities in Iran Peugeot and Renault in pole position to enter Iran’s car market Iran Opening Up, The New Land Of Opportunity Iran important market for European businesses: expert Azerbaijan not impressed by car opportunities of Iran Impact of Iran deal on the automotive market European car makers strives to regain share in Iran's auto market Iran automotive market ‘on edge to take off’
Back to top