Asre Khodro - Groupe Renault has unveiled record sales for 2016, up 13.3% to 3.18m vehicles with Iran the stand-out market booming 110% to double its market share in a single year. 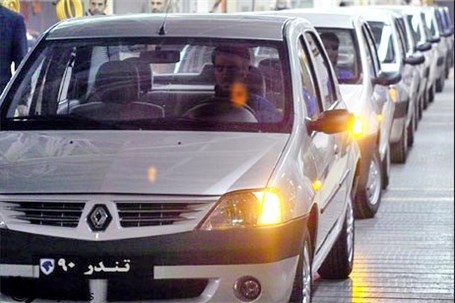 Reporting "Asre Khodro", Worldwide passenger car and light commercial vehicle sales rose by 13.3% in 2016, against 4.6% for the market as a whole. The Group's share of the world automotive market stands at 3.5% (up 0.3 points vs 2015). Both Renault and Dacia brands also registered record sales.

It is Iran which has caught the eye in a stellar set of results however, despite uncertainty engendered by hawkish remarks surrounding the recent international deal with Tehran from US President-elect Trump,with sales surging 110.7% to give Groupe Renault an 8.4% market share, up 3.7 points compared to 2015.

The Groupe maintains it has "reclaimed" its position as a major player on the Iranian market, doubling its market share in a single year after successful performance from Tondar and Sandero.

Outside Europe, Groupe Renault achieved record sales in 2016, up 15.3% on 2015 against growth of 5.2% on the market as a whole. Volumes and market shares were up in all regions.

"Our strategy of product range renewal and geographic expansion, under way for several years now, has proven to be successful. It enables Groupe Renault to progress significantly in terms of volume and market share in each region."

In Europe, Groupe Renault's market share (passenger cars and light commercial vehicles) rose by 0.5 points to 10.6%, while registrations rose11.8% to 1,805,290. Sales were up in all the countries in the region.

The Renault brand stays at the top of the European electric vehicles market, with sales up by 11 % at 25,648 units (excluding Twizy). ZOE heads the electric passenger car ranking with 21,735 registrations (up 16%) and Kangoo Z.E. the electric light commercial vehicle market, with 3,901 vehicles sold.

Despite uneven economic situations across the globe, Groupe Renault says it strengthened its positions to increase its market share in all regions.

For the Africa / Middle East / India region, Groupe Renault registrations rose by 36.4%, giving a market share of 6.2% (up 1.7 points). In India, Renault kept its position as the best-selling European automotive brand, with sales up by 145.6%. Kwid registrations totalled 105,745. India rose five places to become the group's eighth biggest market worldwide.

North Africa showed Groupe Renault holding a 38.5% market share, up by 4.9 points. In Algeria, its market share reached a record 51.3% in 2016, up by 15.7 points, benefiting from local production of Symbol.

In Morocco, where Dacia and Renault hold first and second places respectively, Groupe Renault registrations rose by 22.5%, with record sales yielding a market share of 37.8%.

For the Eurasia region, registrations rose by 2.3% despite market shrinkage of 6.3%. Market share rose accordingly, by 1.1 points to 13.0%, largely driven by strong performance with record sales in Turkey (up 4.4%). Megane Sedan orders topped 13,200 in the first two months.

Sales growth in most of the countries in the region offset the impact of the economic crisis in Russia, where the market collapsed by 10.8%. Renault was able to contain the decline in its sales here at 2.6%, to achieve a record market share of 8.2%, up by 0.7%, chiefly owing to successful performance from Kaptur, which sold more than 14,600 units since it was launched in June.

In the Americas region, Groupe Renault sales rose by 0.1% despite market shrinkage of 4.1%, holding up to the economic difficulties with a market share of 6.5%, up by 0.3 points.

In Brazil, market share rose by 0.2 points to a record 7.5%, on a market that slipped back 19.8% thanks to the performance of the Duster Oroch. In 2017, the group will benefit of its brand new SUV range with Captur, Kwid and New Koleos as well as the arrival of Alaskan.

The Renault brand continues to reap the benefits of pick-up on the Argentinian market, with registrations up by 24.8% against growth of 9.1% in the market as a whole. In Colombia, sales volume and market share hit records (21.3%).

In China, following release of Kadjar, the first vehicle made locally by the Dongfeng Renault joint venture, Renault sales rose by 50.8% against market growth of 14.0%. New Koleos orders approached 10,000 in two months.

Renault notes the Brazilian and Russian markets are expected to become stable, while China will grow 5% and India by 8%.

"Groupe Renault should continue to reap the benefit of product range renewal in Europe and of the strong dynamic on international markets, with Kwid in India, Koleos and Kadjar in China, Kaptur in Russia, QM6 and SM6 in South Korea, and Alaskan plus the SUV range in Latin America," added a Renault statement.

"Groupe Renault therefore expects a sustained growth in sales volumes and market shares in Europe and in the international markets."