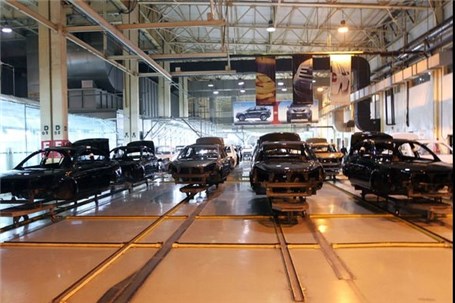 Reporting "Asre Khodro", This is while auto manufacturers estimate their production will grow by about 13% compared to last year, reported Donya-e-Eqtesad.

It seems that the number reported by the automakers has only taken into account the production rate of Iranian companies listed on Iran’s stock exchange, such as Iran Khodro (IKCO), SAIPA and Pars Khodro, while the parliament has included all Iranian automakers, including private companies.

The figures indicate the dearth in information publicly available due to the small stature of subsidiaries and new private companies that continue to have a small market share.

The Iranian state continues to play a key role in the economy with large public and quasi-public enterprises dominating the manufacturing and commercial sectors.

IKCO and SAIPA are the top two auto manufacturers that have benefitted from state support. This might partly account for their relatively better performance.

Since domestic and international factors, which affect Iran’s automotive sector, are improving, the report predicts that the country’s auto industry will continue to grow next year.

Due to the lifting of sanctions and the prevalence of a more business-oriented environment, according to the World Bank, Iran’s real GDP growth is projected to reach 4.2% and 4.6% in 2016 and 2017 respectively.

As the country still relies on hydrocarbon production, Iran’s oil revenues will contribute the biggest share to the projected growth, which seemingly is to be followed by the country’s auto industry.

In fact, the January 2016 lifting of nuclear-related sanctions will provide a short-term boost to Iran’s economy. For sustaining the recovery, longstanding structural reforms are needed, which auto players are eager to implement.

In the last few months, several deals have been signed with international automakers like PSA Group (comprising Peugeot and Citroen) while negotiations with companies like Renault, Volkswagen and Fiat are continuing.

By forging new deals with international companies, Iranian auto manufacturers plan to offer a wider range of products and introduce new models that are likely to rekindle interest in domestic cars.

The Iranian economy is estimated to have advanced at an annual growth rate of only 0.5% in the 2015-16 Iranian calendar, according to the World Bank. Although meager, this has led to a relative rise in citizens’ purchasing power and boosted car demand.

Private companies currently offer easy payment schemes to help increase car sales, while the government offered loans in the past.

According to the report, Iran’s annual auto production rate is to reach 1.4 million units, which is still 200,000 units short of the country’s record registered five years ago.

Sout Korea’s auto exports down 1.6% in Feb. Renault to Return to Iran: Deputy Minister Renault to stay in Iran despite US sanctions M&M plans SUV foray into Iran Automotive Industry in Iran, a short review Automakers are forced to implement new car standards Removing some price ranges from the car market Renault Lead the Way, Nissan Climb An End to Car Importing Suspension The Renault partnership in Russia changes the investment location in Iran
No Cherry-Picking, All Low-Quality Cars Have to Go Details of new rules for importing car to Iran European carmakers on the road back to Iran after nuclear deal Renault has reached to the top market for imported cars in Iran Iran is the place for peugeot to jump the platform What Future for Iran Car Market? France’s Peugeot, Total Looking for Stronger Presence in Iran French Leverage in Iran Auto Industry Iran Carmakers Obliged to Offer 2-Year Guarantees Over 13 million cars in use in Iran Renault Imports to Iran Increase 110% VW's Seat considers selling cars in Iran - CEO Iran to Finalize Deal with Renault in Weeks: Minister Iran Khodro Group Retains 39% Market Share Iran stars as Renault powers to record 2016 sales Renault Duster May Be Obsolete VW to made CNG cars for Iran Iran has potential to be top-10 auto market by 2020 Renault Sales in Iran Up by 127% in September Volkswagen and Skoda look into Iran market entry Renault Looks to Grow Automotive Presence in Iran Iran’s Car Market: Heading High or Low? Peugeot targets 150,000 vehicle sales in Iran in second half Peugeot to try for making Iran its manufacturing hub in Middle East, Africa Germany’s Bavaria to dispatch trade delegation to Iran on Sept. 4 No request to raise the automobile's price is sound Record Registrations for Groupe Renault in H1 2016 Automotive Targets Highlighted How to seize Iran’s automotive opportunities Renault’s Iranian market share rises 7-fold in post-sanction era VW In Iran Rouhani vows to privatize Iran’s car industry VW and Skoda reportedly eyeing Iran as sanctions lift Japanese traders seek new opportunities in Iran Peugeot and Renault in pole position to enter Iran’s car market Iran Opening Up, The New Land Of Opportunity Picking winners in the race to Iran Iran important market for European businesses: expert Azerbaijan not impressed by car opportunities of Iran Impact of Iran deal on the automotive market European car makers strives to regain share in Iran's auto market Iran automotive market ‘on edge to take off’
Back to top