Details of new rules for importing car to Iran

Asrekhodro - The government's decisions to import the car to its final stage are approaching. 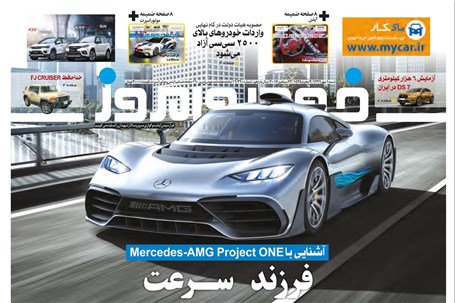 Reporting "Asre Khodro", There are a lot of new decisions in this provision that surely it's implementation will be along with massive margins, since based on this regulation, imports of vehicles with a engine capacity of over 2500 cc will be released and car imports will depend entirely on production.
In this resolution, the car imports more than 2,500 cc, will be released, and respectively, cars with an average price of 40 to 50 thousand dollars, 50 percent increase in tariffs, 50 to 60 thousand dollars increased by 75 percent and for more than 60 thousand dollars, 100 percent to the additional tariff will be.
According to the bill, import tariffs of less than 2,500 cc, will not change.
In the bill, imports are foreseen only by official delegates, and each brand will only be  allowed imports of 3,000 units at a budget of $ 100 million.
For importing more than 3,000 units, there are concessions including car exports, car parts exports and car production.
Thus, the official importers of each brand, on the amount of car exports and auto parts, as well as the production of any car, even domestic cars will have a higher ceiling for their imports.

The enormous complexity of this bill will cause various interpretations in the course of implementation that will make it difficult to enforce the law.

Sout Korea’s auto exports down 1.6% in Feb. Renault to Return to Iran: Deputy Minister Renault to stay in Iran despite US sanctions The order to stop the increase in vehicles tariffs is binding M&M plans SUV foray into Iran Government must restore previous car import tariffs Automotive Industry in Iran, a short review Automakers are forced to implement new car standards Removing some price ranges from the car market Renault Lead the Way, Nissan Climb
An End to Car Importing Suspension The car registration deadline dropped to 3 months The Renault partnership in Russia changes the investment location in Iran Latest news on reforming car import tariff The second victim after SEAT on the verge of escaping from Iran No Cherry-Picking, All Low-Quality Cars Have to Go Increasing car imports The car is topped by major imported items Iran Has 4% Share in Renault’s Int’l Sales Renault Exports to Iran Rises by 83% European carmakers on the road back to Iran after nuclear deal New government approval for car numbering of imported and localized vehicles Car imports has been limited The importers hesitation in the production path Renault has reached to the top market for imported cars in Iran New details of auto importation guidelines and rules and how to collaborate with foreign auto companies. The car importation order will be blocked until further notice 55% increase in vehicle imports in four months An increase of nearly 130% of vehicle imports by the end of July Iran is the place for peugeot to jump the platform Iran Government to Choke Auto Imports? What Future for Iran Car Market? France’s Peugeot, Total Looking for Stronger Presence in Iran French Leverage in Iran Auto Industry Iran Carmakers Obliged to Offer 2-Year Guarantees Over 13 million cars in use in Iran Renault Imports to Iran Increase 110% VW's Seat considers selling cars in Iran - CEO Iran to Finalize Deal with Renault in Weeks: Minister Cars Shipped Through Southern Iran Up 85% Iran Khodro Group Retains 39% Market Share Iran stars as Renault powers to record 2016 sales Renault Duster May Be Obsolete VW to made CNG cars for Iran New Directives of Iran Auto Import Released Iran has potential to be top-10 auto market by 2020 Renault Sales in Iran Up by 127% in September Volkswagen and Skoda look into Iran market entry Renault Looks to Grow Automotive Presence in Iran Iran’s Car Market: Heading High or Low? Peugeot targets 150,000 vehicle sales in Iran in second half A positive political environment has helped Iran’s car market Peugeot to try for making Iran its manufacturing hub in Middle East, Africa Germany’s Bavaria to dispatch trade delegation to Iran on Sept. 4 No request to raise the automobile's price is sound Record Registrations for Groupe Renault in H1 2016 Automotive Targets Highlighted How to seize Iran’s automotive opportunities Renault’s Iranian market share rises 7-fold in post-sanction era VW In Iran Rouhani vows to privatize Iran’s car industry VW and Skoda reportedly eyeing Iran as sanctions lift Japanese traders seek new opportunities in Iran Peugeot and Renault in pole position to enter Iran’s car market Iran Opening Up, The New Land Of Opportunity Picking winners in the race to Iran Iran important market for European businesses: expert Azerbaijan not impressed by car opportunities of Iran Impact of Iran deal on the automotive market European car makers strives to regain share in Iran's auto market Iran automotive market ‘on edge to take off’
Back to top