Asre Khodro - With the world having learnt who will steer Iran’s government in the next four years, a large number of foreign firms have once again lined up to enter the county’s 80-million-strong market, with the French car producer Peugeot and oil giant Total standing at the forefront of the queue as usual. 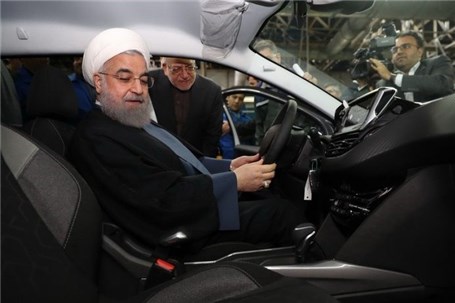 Reporting "Asre Khodro", Following the holding of Iran’s May 19 presidential election, foreign companies, particularly such French firms as Peugeot and Total, have shown renewed interest in making investment in the Islamic Republic’s automotive and oil industries, as two of its big and profitable businesses.

Ahead of other interested European investors, who seek to start a new round of visits to Tehran to hold talks with Iranian companies and sign contracts with them, French firms have already stepped forward to start cooperation with their Iranian counterparts.

Among the French investors, the country’s auto makers are showing greater enthusiasm to seal deals with Iranians. Although following the signing of the nuclear deal – also known as the Joint Comprehensive Plan of Action (JCPOA) – a number of contracts were signed between Iran Khodro Company (IKCO) and Saipa Group from Iran and their French counterparts Peugeot and Renault, respectively, it appears that France’s automobile industry does not regard these deals as sufficient, seeking to expand cooperation with Iranian auto manufacturers.

Most probably, this insatiable thirst for cooperation was the main drive behind the visit to Iran by Jean-Philippe Imparato, the chief executive of Peugeot, a few days prior to the announcement of the results of the elections in Iran. He visited Tehran to hold talks on the latest condition of IKAP, a 50-50 joint venture company between Peugeot and IKCO, based in Tehran and established in 2016.

Although little is known about the details of his negotiations with Iranians, the IKCO’s official sources said the talks centred on IKAP’s production lines as well as the methods for distributing Peugeot’s new cars in Iran’s market, providing after sales services for the cars and advertising them. Nevertheless, Imparato visited IKAP’s top sales representative in Iran which, per se, shows that Peugeot seeks to have a stronger presence in the country’s market than its European and Asian rivals.

Only one month has elapsed since the mass production of Peugeot 2008 mini SUV began in Iran in a ceremony attended by the country’s President Hassan Rouhani. The pre-sale of the automobile is scheduled to begin in Iran soonc. IKCO and Peugeot, which signed a new agreement in the post-JCPOA era, intend to send five products to Iran’s market in the new phase of their cooperation. This comes as, Peugeot, unlike its former type of cooperation with Iran, this time seeks to exercise stricter supervision on the production and distribution of its products in Iran.

The French auto maker’s officials have expressed reluctance to witness the recurrence of the same experience they had in their former partnership with Iran and, thus, this time, intend to display greater sensitivity over issues such as controlling the quality of the cars as well as after-sales services to have a different presence in Iran.

In spring 2017, both Iran and France underwent the same change in their domestic policy to begin summer having already held their presidential elections. In Iran, Rouhani, a moderate political figure, was re-elected to be at the helm of the government for another four-year and France sees Emmanuel Macron, from the Socialist party with liberal-democrat ideas, in presidential office. Macron, was the economy and finance minister in the François Hollande’s administration.

Analysts maintain that the new French president will hardly reconsider ties with Iran, predicting that the increasing trend started in the two countries’ trade exchanges following the going into effect of the JCPOA, will continue. This comes as France is currently beset with a host of economic problems and, thus, would benefit substantially from developing trade relations with untapped markets, such as Iran, which have a great potential for generating revenues. Expanded relations with Iran can help France stimulate economic growth and reduce unemployment.

French Auto-Makers, Oil Firms at the Beginning of the Queue

While the two French auto makers are strengthening their foothold in Iran, the European country’s oil companies also seek to foster economic relations with Tehran.

After Iran and the French energy company Total reached an agreement to construct a refinery complex in Bandar Abbas in southern Iranian, which led to the signing of an MoU to carry out the project’s feasibility studies, now the oil giant is in serious talks on cooperating in developing the Phase 11 of the giant South Pars gas field in the southern Iranian province of Bushehr.

On Wednesday (May 24), Total CEO Patrick Pouyanne grasped the opportunity provided by the holding of the 172nd ordinary OPEC meeting in Vienna to hold talks with Iranian Oil Minister Bijan Namdar Zanganeh on the issue. This shows that, in addition to the French car manufacturers, the country’s oil companies are also serious about expanding presence in Iran.