Asre Khodro :After 10 months of negotiations, Renault is slowly revealing its plans to lift the Iranian automotive market 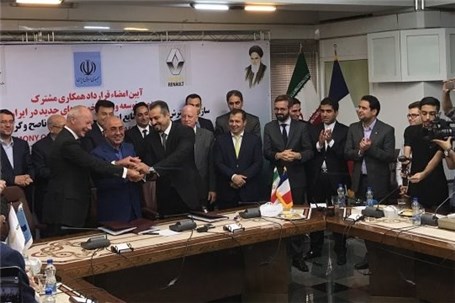 Reporting "Asre Khodro"D uring the past decade, continent by continent, Renault has bought out bankrupt companies and transformed them into profit-making production centers. Now the French business is on a similar trajectory in Iran.

Apart from 22 factories in the Europe, the French carmaker has 14 auto factories in South America, Africa and Asia. In all of these sites it owns the majority share and keeps a tight grip on management.

Furthermore, in all the emerging markets it enters, Renault starts with 150,000 units in the first phase and gradually moves on to higher numbers.

After 10 months of negotiations in Tehran, Renault signed a trilateral production deal with the Industrial Development and Renovation Organization of Iran and a local private company Negin Khodro (aka Naseh Parto) on August 7.

Just like in other emerging markets, in Iran Renault holds a majority stake in the joint venture (60%), while Negin Khodro and IDRO each have 20%. Furthermore, Renault has the right to appoint the director.

According to the deal, a production plant named Bonro in Saveh, an industrial city 100 km south of Tehran will be handed to Renault. Bonro has a history of repeated failures.

Bonro was initially established by a private company in 2003 as Pars Automotive Industrial Group (Topco), for producing Fiat cars in Iran. After the project flopped the factory was sold to SAIPA in 2011.

Since then the Iranian automaker produces the Chinese Ario and the old Pride model at the site.

While SAIPA is the second-largest automaker in Iran, inefficiency, poor management and the company’s woeful financial structure have hit it hard forcing it to borrow from IDRO on several occasions.

According to IDRO chief Mansour Moazzemi, SAIPA owed 8 trillion rials ($2.3 billion) to IDRO in September 2016 -- a sum the company apparently is unable to return.

Around the same time the initial agreement between IDRO and Renault was signed, the state-owned industrial conglomerate seized the Bonro site in lieu of SAIPA’s massive debts.

The facility will initially produce 150,000 Renault cars annually and output will reach 300,000 units eventually. Payman Kargar, former Iran director for Renault and current chairman of the Middle East and India region for Nissan Group tweeted after the Renault-IDRO-Negin deal was signed saying that the company is set to produce 400,000 vehicles.

Aiming to cut costs and cater to the needs of the emerging markets, in collaboration with its Japanese partner Nissan, Renault introduced a modern system of modular architecture dubbed Common Module Family in 2013.

The CMF platform follows in the footsteps of a similar system by Volkswagen and enables carmakers to build a wider range of vehicles from a smaller pool of parts and thereby increasing customer choice and quality.

Furthermore, in modular vehicles most parts are interchangeable. The modularity is intended to also make repairs and maintenance easier and allow the vehicle to be reconfigured to suit different functions.

In the Renault-Nissan modular production plan, small vehicles are based on CMF-A, while mid-sized vehicles use CMF-B, and the largest vehicles CMF-C/D.

The so-called CMF-A with small vehicles like Kwid could be Renault’s winning card in emerging auto markets like Iran. This low-cost method has already worked for the firm in Brazil and India.

One of the other perks of modular production is that Renault will easily be able to integrate Iranian auto parts makers into its international chain.

According to the deal, Renault is required to export 30% of the vehicles or auto parts manufactured in Iran through its international sales network. However, observers do not believe that the company will be able to satisfy the clause in the long run since Iranian auto parts makers are suffering from lack of modern technologies and have been lagging behind the international auto industry.

One of the possible options for the French carmaker is integrating Iranian parts makers in its modular scheme, therefore Renault might be able to export the parts produced in Iran to other emerging markets. Each unit can be used in a wide range of vehicles and Renault will have a long list of options with respect to export targets.

While modular production is not a new notion in the industry, Renault’s operations in this regard will be the first of its kind in Iran.