Asre Khodro: Renault Trucks is expanding cooperation with the Iranian importer Arya Diesel Motors. On December 21 the two sides signed two agreements in Lyon: an import agreement covering vehicles from the T, C and K ranges and an industrial collaboration agreement for the assembly of T range vehicles. 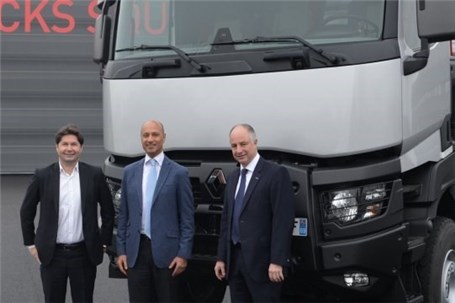 According to a company press release, the first covers the import, distribution and after-sales service of the T, C and K ranges. With the new agreements the two parties seem determined to boost a relationship that started in 2006.

The manufacturing site of Arya Diesel Motors, located 90 km southwest of Tehran, will  start by assembling Renault Trucks T, with industrial operations set to commence in Q3 of 2017. Before the year 2012 when the west imposed sanctions on Iran due to its nuclear energy program; this manufacturing site, which was built in 2009, assembled Renault Premium and Kerax.

“Iran is an important, historic market for Renault Trucks. We are now returning to the country with strong, reliable vehicles and a high-quality partner, Arya Diesel Motors. Our ambition is to eventually achieve a 15 % market share”, says Bruno Blin, president of Renault Trucks.

Building on the legacy of more than a century of French truck know-how, Renault Trucks supplies a wide range of services and vehicles (from 2.8 to 120 T). Renault heavy vehicles are sturdy and reliable with low fuel consumption that enables them to deliver greater productivity and control operating costs.

Renault Trucks is distributing and servicing its trucks via a dealership network comprising 1,500 plus service outlets across continents. The design and assembly of its trucks and the production of most parts is carried out in France.

Renault Trucks is part of the Volvo Group, one of the world’s leading manufacturers of trucks, buses, construction equipment and marine and industrial engines. The group also provides complete solutions for financing and service. The Volvo Group, which employs 100,000 people, has production facilities in 18 countries and sells in more than 190 markets.

In 2015 Volvo sales amounted to about SEK 313 billion (€ 33.4 billion). It is a publicly-held company headquartered in Göteborg, Sweden. Volvo shares are listed on Nasdaq Stockholm.

Arya Diesel Motors was established in 2006 to represent Renault Trucks in Iran. It started by distributing CKD vehicles before investing in a manufacturing south of Teheran. It also assembled (semi-knocked-down) models of Renault Kerax and Premium. Arya Diesel network has 30 sales outlets, 18 service outlets across Iran.