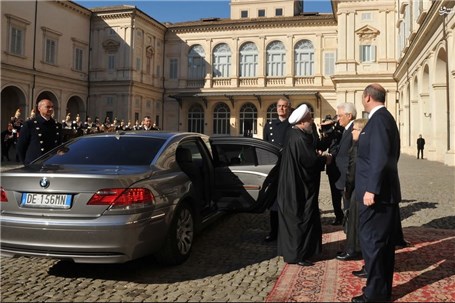 Asre Khodro: Iranian President Hassan Rouhani arrived in Italy on Monday for the first stop of a European tour that may see him explore manufacturing partnerships with Fiat Chrysler Automobiles, PSA/Peugeot-Citroen and Renault.

Reporting Asre Khodro, On the first day of his visit, Fiat Chrysler CEO Sergio Marchionne will attend a ceremonial dinner with the Iranian president and other executives in Rome. Rouhani may sign deals valued at about 17 billion euros ($18.4 billion) in Italy, according to an official there who asked not to be identified because the information isn't public. He will hold talks with Prime Minister Matteo Renzi and meet Pope Francis on Tuesday in the Vatican.

At Fiat Chrysler, Marchionne has said he sees opportunities in Iran once things stabilize. The automaker has held talks about building light commercial vehicles and buses in Iran, the state-run Islamic Republic News Agency reported Nov. 29, citing Mohammad Reza Nematzadeh, minister for industry, mines and trade. An outline deal on manufacturing in Iran failed to get off the ground in 2005, and Fiat halted sales in the country in 2012.

Rouhani travels from Italy to Paris on Wednesday for a meeting with President Francois Hollande, and may sign deals with PSA and Renault, according to Iranian reports. Iran Khodro Co., one of the country's largest carmakers, reached a preliminary agreement for a 500 million euro joint venture with PSA, the Tasnim news agency reported Sunday, citing an industry official it didn't identify.

Rouhani is also likely to complete an agreement to take 114 Airbus planes to upgrade Iran's aging fleet, possibly including a headline-grabbing order for the planemaker's flagship A380 superjumbo.

Iran is looking to reap the benefits of its nuclear deal with world powers in July, which paved the way for the lifting of economic sanctions this month as the Islamic republic seeks to revive economic growth and lower unemployment. The removal of trade bars may trigger at least $50 billion a year in foreign investment, the country's central bank governor said in an interview last week.

This week's trip is Rouhani's first to the European Union since his election in 2013 on pledges to end sanctions and rebuild links with the rest of the world.

"We should take advantage of the post-sanctions climate to develop the country and create jobs," the president said before leaving for Italy, according to the Fars news agency.