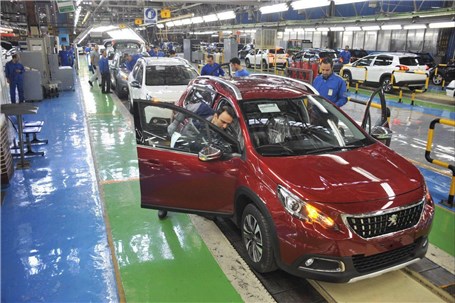 Reporting "Asre Khodro", According to a local automotive website, Persian Khodro, the line is set to produce more than 30,000 units in the fiscal year that begins on March 21.

The car’s body is produced locally by one of the subsidiaries of IKCO, called TAM which makes the vehicle meet the bare minimum of 30% localization need.

The price for the new car is estimated to be 770 million (€18,780), according to an earlier report by the local technology site Zoomit.

The announcement of the vehicle comes only two weeks after a picture was released on IKCO’s Telegram account showing the first 2008 model rolling off the line in a test production.

In February in a confirmation of the date, Jean Philippe Imparato of Peugeot said that production of the Peugeot 2008 “would start before the coming Persian New Year.” He was speaking at a conference on Iran’s automotive future.

The Peugeot 2008 is a compact SUV that will have to take on strong competition in the form of the Renault Captur, Kia Soul and Nissan Juke. All of these front-wheel drive cars offer an SUV-like stance, urban-appropriate supermini dimensions, and low running and purchase costs.

The 2008 is a family-friendly SUV, a tall, 208 supermini-based, a four-meter-long entrant into an increasingly saturated market.

Like most of its rivals, it is typically a straightforward piece of engineering. While considerably more meat has been added, the platform beneath the taller car is the same as the one that underpins the 208. Overall the 2008 might be a heavier car, but it is more practical than the supermini on which it is based.

Shockingly, the vehicle only has a 1.2 liter engine inside which gets 110 horsepower, however, according to reports from Europe, the car has enough power to pull it through the Tehran traffic with its automatic gearbox.

Accordingly, the car gets a combined fuel cycle of 4.8 liters per 100 km, official statistics state.

Britain’s WhatCar magazine states the car does a good job through the urban sprawl, with its light steering controls.

The Peugeot 208 model is hotly anticipated to take over from the current 206 model, which has been produced in Iran for over a decade.

During the sanctions years, most Peugeot 206 parts were supplied by Iranian and Chinese automakers and the model is to remain in production for the foreseeable future due to the price difference.