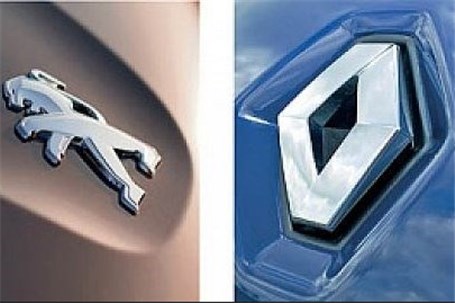 Reporting "Asre Khodro", Peugeot has been struggling to negotiate a bigger manufacturing deal with partner Iran Khodro, the country's largest automaker, amid lingering anger over its abrupt 2011 withdrawal.

Now Renault plans to use $560 million of its cash that had been trapped in Iran to seize the advantage, after July's international deal to lift sanctions in exchange for nuclear curbs on Tehran, people familiar with the matter said.

"Our strategy is to be the biggest carmaker in the country," said a Renault source with knowledge of the discussions.

"PSA has made a lot of statements (about Iran)," the Renault source said. "Chickens shouldn't be counted before they are hatched."

With 80 million consumers and 1.1 million cars sold in 2014, Iran is already the Middle East's biggest auto market and has potential for rapid growth. The lifting of international sanctions may begin as soon as March, Britain's foreign minister said last week, opening the way for investment.

For Renault and Nissan, its 43.4 percent-owned alliance partner, Iranian production would bolster an already strong presence in emerging markets.

Reclaiming Iran is even more critical for Peugeot, racing to expand outside Europe after a brush with bankruptcy. The company said recently it was counting on Iran for about 400,000 annual vehicle sales by 2020.

Peugeot remains in talks "with various partners including Iran Khodro" on a manufacturing venture, a spokesman said. Renault declined to comment.

Under earlier agreements with both French carmakers, the Iranian company builds Renault and Peugeot models from pre-manufactured kits known as complete knock-downs (CKD).

Peugeot's Iran sales peaked at 458,000 vehicles, nearly 30 percent of the market, before it halted deliveries four years ago under pressure from then-partner General Motors.

The French company now tolerates Iran Khodro's "unauthorised" assembly of Peugeots from grey-market parts. But their estrangement is a gift to Renault, Volkswagen and other rivals now poised to muscle in.

"Peugeot must know that it must account for its past behaviour," Iran Khodro chief Hashem Yakke-Zare told state-owned PressTV in late July, adding that the French carmaker "will not be our main partner".

Renault has been working behind the scenes to fill that vacancy, company sources said, and sees potential for annual production of 400,000 cars in Iran by 2020.

"Unlike PSA we have always remained in Iran," a Renault source said. "Loyalty should pay."

Renault is also touting lower-cost vehicle platforms that its rivals mostly lack. VW has been struggling for years to develop dedicated emerging-market cars, while Peugeot's equivalent lineup will not begin to reach showrooms before 2019.

Leading industry forecaster IHS Automotive expects Renault to claim as much as 12 percent of a transformed Iranian market in 2020, two or three percentage points ahead of Peugeot.

Under existing partnerships with Iran Khodro and smaller player SAIPA, Renault is preparing CKD production of its Sandero small car and Logan pickup while discussing a full manufacturing investment to include a mini-SUV just launched in India.

Financial sanctions that had stranded Renault's Iranian earnings now offer a head start, by keeping rivals out until the embargoes are lifted in coming months.

"Rather than repatriating the cash, the idea is to make the most of it," another Renault source said.

One possibility is "to buy a chunk of an Iranian company", he added - an option that was rejected as too risky when last considered more than a decade ago.

Renault and Peugeot executives are expected to join a French business delegation visiting Iran from Sept. 21-23.

The French government, a major shareholder in both carmakers, has "put the case for the two groups" to Iranian leaders, Foreign Minister Laurent Fabius said on July 30.

While Renault's plans were "positively welcomed", however, Tehran officials still criticise Peugeot for its earlier retreat, Fabius said. "So that may prove more difficult." (Additional reporting by Gilles Guillaume, editing by David Evans)