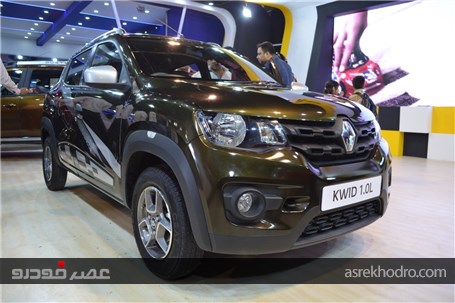 Asre Khodro- The Renault Kwid is Renault’s most successful product in India by far. Buoyed by the mini car’s phenomenal sales performance, the company has decided to expand the Kwid family to four models.

Reporting "Asre Khodro", One of the Renault Group’s key assets is its successful Global Access Range comprising highly-localised, low-cost cars in cost-competitive countries. The French conglomerate has sold 10 million global access cars in 13 years. Now, the plan is to sell 2 million global access annually by the end of 2022. That is 7.5 lakh more units than the sales in 2016.

We obviously will expand the (Renault) Kwid family, with two new models covering two new segments, designed first for the Indian market and then expanded from there. Stefan Mueller, Renault’s Chief Performance Officer, will further develop our strategy regarding global access and emerging markets.

Our global strategy is based on a line-up expansion with (Renault) Kwid family going from 1 to four models, a full renewal of (Dacia) Logan and (Dacia) Sandero, and Duster renewal, and a new C-SUV offer in the future.

Renault Kwid-based sedan IAB rendering
Renault previously planned a sub-4 metre sedan based on the Renault Kwid, but as per a report earlier this year, that plan was shelved.

Also Read: Renault India’s next launch is a seven-seat crossover MPV in 2018