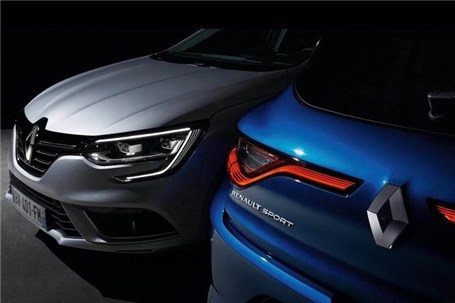 Asre Khodro: In a global automotive market up 5 per cent, Groupe Renault’s registrations rose by 16 per cent to 721,741 units. The group’s market share increased by 0.3 points to 3.3 per cent.

Reporting "Asre Khodro", The group continued to enjoy traction from the renewal of its range in a buoyant European market (+5.3 per cent). Its registrations rose by 11.3 per cent, with market share gaining 0.5 points to 9.5 per cent.

Sales under the Renault brand grew by 8.1 per cent thanks to the success of new Mégane, Kadjar, Espace and Talisman models. Clio IV remains the second bestselling vehicle in Europe and Captur was again the leading crossover in its class. In Europe, in the electric vehicle segment, Renault’s market share came to 20.8 per cent in the third quarter, while ZOE posted a 22.4 per cent growth.

Sales under the Dacia brand increased by 22.1 per cent, due chiefly to Sandero Stepway and Duster.

In France, the group outperformed the market with a 3.9 per cent rise in registrations to 123,000 vehicles in the quarter. The group placed five vehicles in the Top 10 best-selling passenger cars at the end of September, with Clio IV coming in at number one and Captur leading its segment. Sandero remains the best-selling car to retail customers, at the end of September and for the third quarter.

Internationally, despite turbulence in Brazil, Russia and Algeria, group sales increased by 21.5 per cent in the third quarter. The group increased its market share in each region.

In the Africa, Middle East and India Region, the group’s registrations were up by 85 per cent as market share gained +2.7 points to 6.4 per cent.

In Iran, Groupe Renault confirmed the trend of the first half of 2016, with deliveries up 135.5 per cent thanks to the success of Logan and Sandero. The group’s market share increased by 2.9 points to 9.6 per cent.

In India, the market grew 17 per cent while Renault registrations were multiplied sevenfold thanks to the success of Kwid. 82,771 Kwids have been registered since the start of the year, including 34,350 in the third quarter alone.

In North Africa, Groupe Renault registrations rose by 13.6 per cent, in a market down 15 per cent. Market share increased by 10.6 points to reach a record 42.2 per cent. In Algeria, the market continues to be weakened by the current regulations setting import quotas. Within this context, the group consolidated its lead in the country with a market share of 63.1 per cent, a gain of 29.2 points. The three best-selling vehicles were Symbol and Sandero – both of which are manufactured at the Oran plant – and Logan.

In the Americas Region, the group’s market share increased by 0.2 points to 6.9 per cent.

The Renault brand continued to benefit fully from the recovery of the Argentinean market, with its registrations up 21.7 per cent in a market up 12.7 per cent. In Brazil, in an automotive market down sharply (-17 per cent), the group held up well, increasing its market share by 0.4 points to 7.8 per cent. The end-2015 launch of Oroch and the upcoming launch of Alaskan are enabling the group to expand its offering and position itself in the pick-up segment.

In Eurasia, the group’s market share improved by 0.7 points to 12.4 per cent. In Russia, where total industry registrations fell by 15.1 per cent, Renault held up well, registering a limited 4.7 per cent decline. Market share expanded 0.9 points to 8.3 per cent, due to the successful launch of Kaptur, for which more than 7,500 orders have been placed since its launch in June 2016. In Turkey, the group was impacted by the market decline, with sales down 23.1 per cent.

In Asia Pacific, the group’s registrations rose by 25.6 per cent in a market up 11.5 per cent. In South Korea, the group’s largest market in the region, Renault Samsung Motors posted 24.5 per cent growth, driven by the success of its new SM6 sedan and its QM6 crossover. Market share expanded 1.9 points to 6.3 per cent over the period. In China, pending the upcoming launch of Koleos, 10,686 Kadjar have been registered since the model’s introduction in March, including 6,032 in the third quarter alone. The sales network, which currently encompasses 125 dealerships, is expected to grow to 150 outlets by the end of the year.

Automotive revenues came to €9,989 million, up 13.5 per cent thanks to an increase in volume (+10.7 points) and pricing (+4.6 points). This last effect still benefits from price increases in emerging countries to offset currency declines, but as well from recent launches. Growth in Sales to Partners (+1.8 points) reflects the positive momentum of our CKD[1] activities in Iran and China, as well as the increased production of vehicles to our partners in Europe. The euro’s gain against a number of currencies, including the Argentinean peso and the British pound, resulted in an unfavourable impact of 3.8 points. Product mix is negative this quarter (-2.5 points), mainly due to the impact of Kwid in the group’s sales.

Sales Financing (RCI Banque) reported revenues of €557 million, up 4.3 per cent compared with the third quarter of 2015. The number of new financing contracts rose by 10.0 per cent. Average performing assets increased by 17.5 per cent to €33.9 billion.

In 2016, the global market is expected to record growth around 1.7 per centcompared to 2015. The European market, as well as the French one, are now expected to increase by at least 5 per cent.

Within this context, Groupe Renault (at constant scope of consolidation) confirms its full-year 2016 guidance: 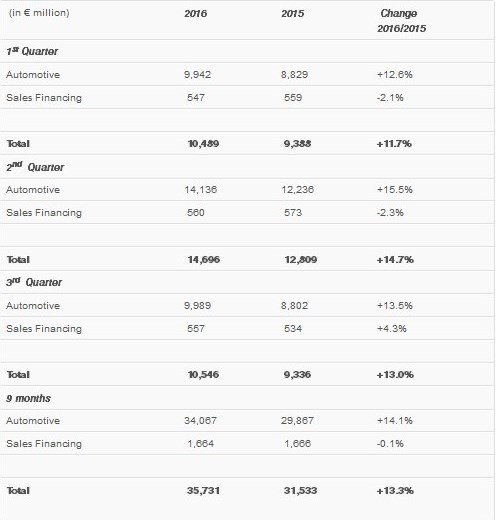