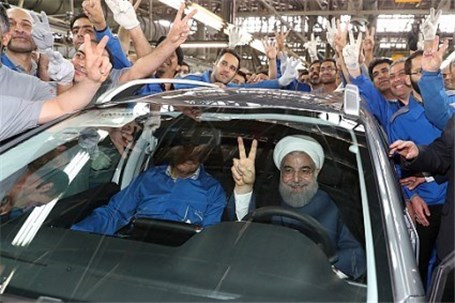 Rouhani to realize his biggest electoral promise in the automotive industry

Complete privatization; First Iran Khodro and Saipa after that

Asrekhodro- In an announcement addressed to the Stock Exchange, IranKhodro Industrial Group announced the sale of Samand's intra- corporate shares.

Reporting "Asre khodro", IranKhodro Industrial Group finally completed the privatization process in the automotive industry and announced in a letter to the Stock Exchange that it intends to auction shares in the Samand Investment Company as one of its intra-corporate shares, thus giving one of the main promises of the President in the automotive industry In the management period of Hashem yeke Zareh will be fulfilled.
Hassan Rouhani promised a reformation two years ago in the country's automotive industry, which was once again on the agenda in the occasion of the coming of the minister of industry, mining and trade in the twelfth government.
The promise of Iranian privatization has always been given by many governments. It seems that the promise will be fulfilled by Hashem Aj-Zare, whose name will surely be recorded by handing over the Samand bloc as the historian of the industry, and the government will act on its domestic and international promise in the automotive industry.
The new industry minister has proven to everyone that he considers the historical salvation of the Iranian automotive industry to be good, and will not waste any moment for the actual improvement of the way the car industry management.

We should congratulate the twelfth government that dared and made such a big decision.
All the media in all over the country need to work hard to fulfill this great event and historic demand of the people and the shareholders of the automotive industry.
It is worthy of the Iranian economy to announce a big celebration on the occasion of the auction ceremony of Samand Stock in Iran, which is just the beginning, and we will soon see the implementation of the government decision in Saipa and the large and influential industrial enterprises of Iran.
Proving government promises in the automotive sector would be encouraging days of a great prosperity in Iran's industry and economy, and is a response to people's trust in industrial and economic promises of elections.