Asre Khodro - According to the latest figures released by the Iranian Customs during the first four months of this year, imports of passenger cars with the engine volume of 1500 to 2000 caliber, ranked third of the major import items to the country. 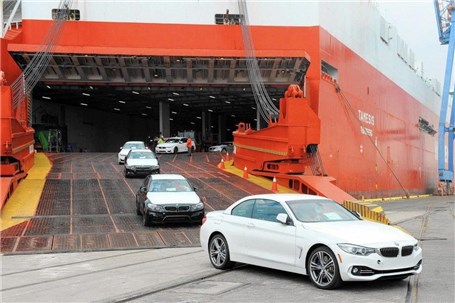 Reporting "Asre Khodro", During this period, "1.5 to 2 liter vehicles , except ambulances and hybrids" worth $426 $million, earned 2.69 percent of the total value of imported items and increased by 129.9 percent.
On the other hand, according to the published statistics, the value of "disassembled parts for the production of gasoline cars with a cylinder capacity of 200 cc with self-sufficiency of between 14% to less than 30% excluding tires" imported into the country was $ 311 million and a share of value 1.96 percent.
The increase in the import of gasoline cars in the four months ended May this year has been such that the Ministry of Industry, Mine and Trade has been shutting down its registration site for more than 20 days on official car importers, and the time for opening the site has not yet been identified.
The expiration of the informal agents removed from the list of car importers since the end of last year is one of the reasons why this increase could be attributed.
According to the authorities, the informal importers were allowed to enter and clear the cars for a period of six months and until the expiration of registration of their order, which was completed in July this year, so meanwhile, the car importers were able to move as far as possible. although the official importers helped to ascend import car by registering orders, also.

The order to stop the increase in vehicles tariffs is binding Government must restore previous car import tariffs Instructions for vehicles importing is announced Detailed importing tariffs for all types of vehicle were announced The car registration deadline dropped to 3 months The second victim after SEAT on the verge of escaping from Iran Increasing car imports The car is topped by major imported items Iran Has 4% Share in Renault’s Int’l Sales Renault Exports to Iran Rises by 83%
Details of new rules for importing car to Iran New government approval for car numbering of imported and localized vehicles Car imports has been limited The importers hesitation in the production path New details of auto importation guidelines and rules and how to collaborate with foreign auto companies. The car importation order will be blocked until further notice Negin Khodro ended the Korean monarchy in Iran's car market 55% increase in vehicle imports in four months Iran Government to Choke Auto Imports? Cars Shipped Through Southern Iran Up 85% New Directives of Iran Auto Import Released Iran’s Auto Import Report by MSD Rise of Koreans!
Back to top