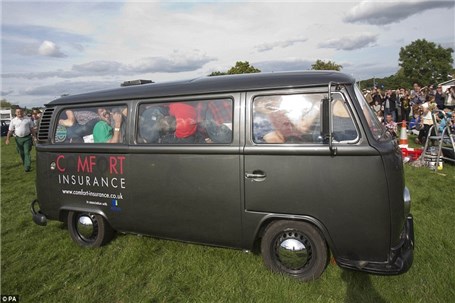 Asre Khodro: This is the moment 51 bus enthusiasts brought a new meaning to the term people carrier as they set a new world record for the number of people crammed into a classic VW Campervan.

Reporting "Asre Khodro", People of all ages packed into the 1974 vehicle during the Busfest van festival in Malvern, Worcestershire, yesterday.

The attempt, recognised as a Guinness World Record, also helped raise money for Make-A-Wish Foundation, a charity that grants wishes to children and young people fighting life-threatening conditions such as cancer.

James Lewis, from BBC’s Flog It and Bargain Hunt, was there to witness the record-breaking attempt organised by Comfort Insurance.

He said: 'I’ve been involved in quite a few world records in my time but this has been one of the most exciting yet, especially as it has never been done before and for such a worthy cause.'
One of those who took part, Calvin, added: 'I didn’t think we’d do it at first. People’s hands and arms were squashed in my face. When it came to the last person, everyone joined in to pull him in. What a great atmosphere!'

Busfest saw around 25,000 campervan enthusiasts and 5,000 vehicles visit the festival over the weekend.