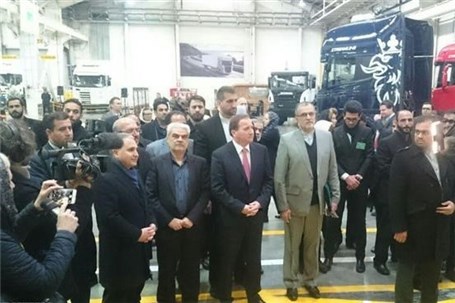 Sweden in pole position in Iran with bus deal

Asre Khodro - Swedish truck maker Scania has signed an agreement to deliver 1,350 buses to Iran where Prime Minister Stefan Lofven visited with his largest business team to the country ever.

Reporting "Asre Khodro", Lofven and Scania CEO Henrik Henriksson oversaw the signing of an agreement in principle with Iran’s Shahr-e Atiyeh investment company and the province of Isfahan on Sunday.

Under the deal, Scania is about to supply Isfahan with 350 buses and four other major Iranian cities with 1,000 more units, providing them with sustainable transport solutions.

The first of these new buses will be in operation at the end of 2017, the truck marker said in a press release. Shahr-e Atiyeh will provide financing for 1000 of the buses.

Iran is one of Scania’s top ten global markets. The company has been in operation in the country since 2000 through Oghab Afshan, a privately-owned partner and distributor of buses.

The Swedish company has undertaken to develop solutions for minimum emissions in the country where air pollution is a major problem in big cities, claiming lives and affecting quality life and business activity.

"Together with our partners, we have a strong presence in Iran with comprehensive industrial operations and an extensive service network," Henriksson said on Sunday.

“We look forward to developing this market even further to provide the best services and sustainable transport solutions to our customers," he added.

Scania has another Iranian partner for distribution of trucks. On Sunday, Prime Minister Lofven visited Mammut Diesel in Qazvin west of Tehran, where Scania trucks are assembled.

Unlike Volvo, Renault, and Daimler, Scania did not halt its operations in Iran when the country was slapped with Western sanctions in 2011.

“We stood by our customers,” said Henriksson who has visited Iran seven times in the past year as the company plans to expand local operations.

According to Henriksson, Scania was able to continue its activities in Iran with the necessary approvals only by “maintaining open books with all relevant authorities.”

Now that the truck maker’s global competitors are returning to Iran, Scania is in pole position in both the truck and bus market segments in Iran, controlling 64% and 37% of the respective market share.

Scania’s annual business in Iran is worth 336 million, but Henriksson believes this figure could double if financial channels to Iran were opened.

"It is no secret that it is difficult to do business. Channels must be opened if the market is really to take off," he noted.

Foreign companies are wary of business with Iran despite the lifting of sanctions under a nuclear accord. They may exercise even more caution because of new US President Donald Trump’s harsh rhetoric against the Islamic Republic.

Henriksson, however, said his firm is seeking to expand its constructive role.

"We can contribute with our skills in leadership and education. We want to take part in the effort to improve the environment and road safety in Iran, and hope to receive the support of the Swedish government for this," he said.

Volvo, another Swedish truck maker, resumed its operations in Iran in May 2015, putting an end to four years of absence from the country’s massive market under sanctions.

The company marked its return by opening a production line for a new generation of Volvo FH trucks at Saipa Diesel west of Tehran.