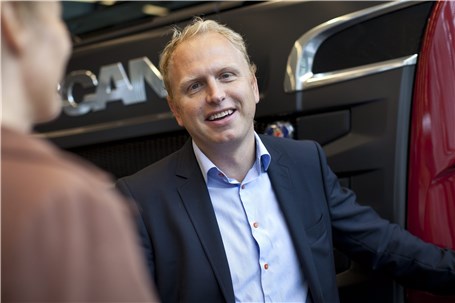 Asre Khodro: Scania had been preparing for a new presence in Iran during last couple of years, Henrik Henriksson, president & CEO of Scania CV AB said.

Reporting "Asre Khodro", “We stayed in Iran during the sanctions and supported our customers and partners, Oghab and Mammut”, Henriksson said in an exclusive interview with Khodro Emrooz.
“For us the last couple years has just been a preparation for the market to take off but meanwhile we had a great success and strong market share, both on trucks and buses”, he added.
“We have used the time to build a strong network, workshop and sales hub in the country so now that the market is coming back we will be well positioned”, CEO of Scania.
About the Iran’s priorities versus neighboring countries that encourages Scania, Henriksson said that Iran is the biggest market in the Middle East and the powerhouse in the region. “We are selling premium products and best quality in the world and that is what Iranian costumers understand and that’s why we believe that Iran is important.” he added.
“We have full range of city buses for BRT and we have full range of coaches”, he said.
“On the truck side, we have full range. We are working on different kinds of applications such as trucks for fuel transport, cargo, vehicles for construction, concrete mixers and distribution vehicles”, Henriksson said.
“So far we have had true partnership and separated our ownership. But now we are coming to the stage to explore different kinds of joint ventures and we will also establish our own company in Iran. So I think going forward now it will be a mix of certain operations by Mammut and Oghab, certain industrial products will be joint ventures and certain things will be Scania fully own”, he said about the type of partnership between Scania, Mammut and Oghab.