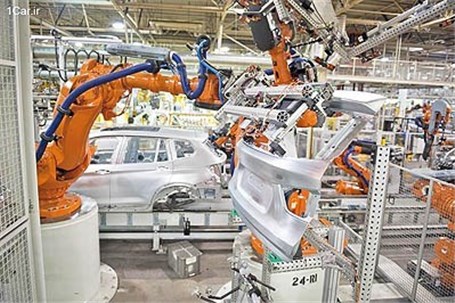 Asre Khodro - SAIPA's management team and a delegation from China's Brilliance Auto held a meeting on November 23 confirming the arrival of several new models in the local market.

In addition to Brilliance, SAIPA has been able to forge deals with Renault, Citroen, and Kia in recent months.

“The SAIPA-Brilliance JV will enable the two businesses to claim a bigger share both in the local and regional markets,” he said.

He named reliability and high quality as two major reasons for the success of the JV’s products among Iranian car buyers and added: “We will introduce new models in the market shortly,” further noting “SAIPA and Brilliance are aiming to export the jointly produced vehicles to the neighboring countries.”

“In the first production phase 40% of the parts needed for the cars were made locally, and the number is to ramp up to 70% in the upcoming three years.”

According to rules of local production, as per any JV deal, 20% of production technology must be transferred to Iran.

Jamali also said that the SAIPA-Brilliance JV is aiming to increase its share in the domestic market through introducing new models, improving quality and lowering prices.

Leung Ping Ching, head of the Chinese delegation said: “Brilliance has been monitoring activities of SAIPA under the brand's name closely.”

Ching named SAIPA as one of the leading automotive companies in the region and said Brilliance is aiming to expand its presence in the Middle East further adding: “SAIPA seems to be the ideal partner for the purpose.”

There also have been rounds of talks between the two companies about bilateral collaborations in the auto parts industry. “Hopefully the required platform for auto parts production will be established soon.”

SAIPA and Brilliance started their joint production line in Karaj, west of Tehran last May.

The assembly lines are for production of the brand's H220 H230, H320 and H330 models. There are also a limited number of Brilliance V5 SUV models for sale in the second hand market.

According to earlier reports, SAIPA is set to manufacture an estimated 60,000 Brilliance cars by the end of next Iranian calendar year in March 2017.

At the time SAIPA’s Director General, Saeed Madani was quoted by the local media as saying that the Chinese company invested $60 million for starting the production lines.

Earlier this month, Pars Khodro, which assembles the models announced it would be bringing the C3 Crossover model to the Iranian market.

The car dubbed Brilliance C3 in China is the largest of the range, Asre Khodro reported on November 13.

The vehicle has already gone on display at a Pars Khodro showroom in Tehran with the same brand name. It is estimated to be priced at 550 million rials ($15,280 at market exchange rate) to 600 million rials ($16,700), according to the company’s official literature. It has a 1.5-liter engine and comes with both manual and automatic transmissions.

With some 800,000 cars manufactured, Brilliance is the world’s 23rd largest auto manufacturer and China’s seventh company active in the auto industry regarding the number of vehicles produced during 2013, according to Financial Tribune.

Brilliance has been exporting to more than 80 countries worldwide. Also, BMW and Brilliance have been collaborating for over ten years in China, and the company manufactures BMW three and five series vehicles as well the X1 SUV. Many of the BMW design elements can be spotted in the Brilliance cars in the local market.