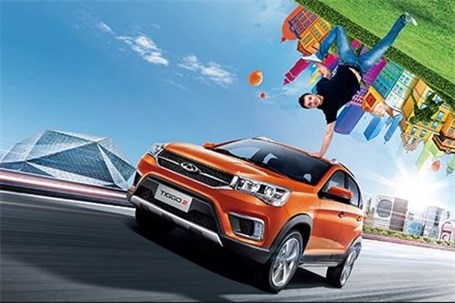 Asre Khodro- TIGGO 2, an all-new SUV model of Chery positioned for young consumers, was launched into market in Chile, Peru, Iran and Russia, etc. at the beginning of 2017.

Reporting "Asre Khodro",As the new-generation member of TIGGO family in Chery, TIGGO 2 has realized nearly 10,000 units of overseas sales thanks to its precise positioning, consumers’ experience and innovative marketing mode. Its exceptional sales performance has maintained momentum of rapid growth, with the quality and strength proved by both reputation and market performance.

TIGGO 2 has dynamic and streamlined appearance, which looks young and energetic. Together with the diverse colors, its design greatly caters to overseas consumers’ aesthetic preference for SUV. Even more, TIGGO is equipped with 8-inch screen, RVC, cruise control and other high-tech configurations, which outperforms its same-class competing models. Besides, the convenient control also gains great praise from users. When just put into the market, TIGGO 2 has captured great attention from overseas media and consumers while accumulating wonderful reputation in the market.

In early January, Chery held the pre-launch party for TIGGO 2 themed on Feeling Young in Iran, which combined freestyle football performance with product experience and presented its dynamic charm in the sports. After that, TIGGO 2 was launched into market in the Tehran Auto Show, winning trust of consumers because of its stylish appearance and practical configurations. In just one week, it received large-quantity orders and made exceptional sales performance.

In early March, 2017, Chery TIGGO 2 held the ceremony of delivering to 1,000 consumers in major dealers in Iran at the same time. About 1,000 consumers in Iran received TIGGO 2 keys, who looked extremely excited. The event was witnessed by top executives of Chery International, Iran dealers, owners of Chery automobiles in Iran and many mainstream media in the country. The gorgeous-looking TIGGO 2 vehicles were lined outside the shops. Together with the red carpet and dazzling fireworks, it presented the brand nature of Chery featuring youth. It is believed that TIGGO 2 will make even better performance in Iran market.

In March alone, 849 TIGGO 2 units were exported to Chile, rising by more than 300% MOM. Within three months after its launch, TIGGO 2 ranks among Top 5 in SUV niche market, with its market share climbing to 6%, becoming a very competitive SUV model in Chile market.

In 10 years time, more than 1 million TIGGO products of Chery have been sold in the overseas markets. Launch of TIGGO 2 has not only enriched product line of Chery SUV. Even more, its exceptional sales performance in less than three months has fully proved the wonderful market reputation and precise product positioning. TIGGO 2 will soon be launched in Colombia，Ecuador and other markets. With its youth-oriented design and considerate service, it will continue to promote competitiveness of Chery in the overseas niche market of SUV.